Do you want to see yourself here, up in lights on the www for the whole world to see? Get your 15 minutes of fame 24 hours a day 7 days a week. Send us (or bring us) some pictures like these people did!

Here is Michael Lasher and his K9 pal Katie. Michael bought the Cannondale Jekyll and Trek trailer from us in the summer of 2003. We are not sure if Katie just jumped in the trailer, or if it was planned that way. 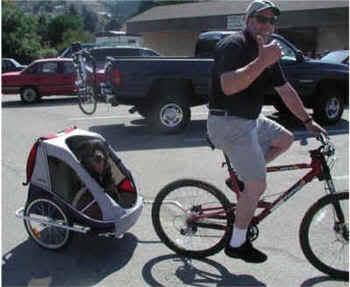 Kurt Kruger at a race somewhere in.... He may have thought that we would never put his picture up, but he is so good looking we couldn't wait to post TWO pictures. 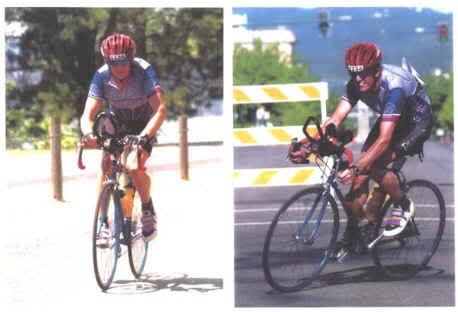 For a free Ped T name the Triathlon Kurt is riding in! Kurt can't play at all and his friends shouldn't!

Michelle Impey sent us this picture all the way from her new home in New Zealand. Nice jersey!
This picture was taken at Fletcher Bay on the north tip of the Coromandel Peninsula. 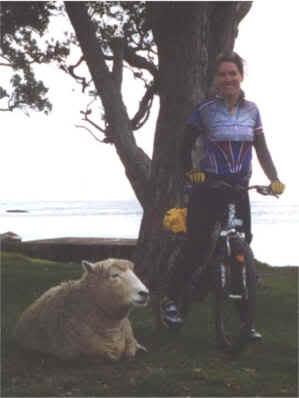 Not to be outdone Sam Louras of Orinda, California, went to New Zealand and conquered Haast Pass, over 1700 feet of climbing, ON VACATION!!! 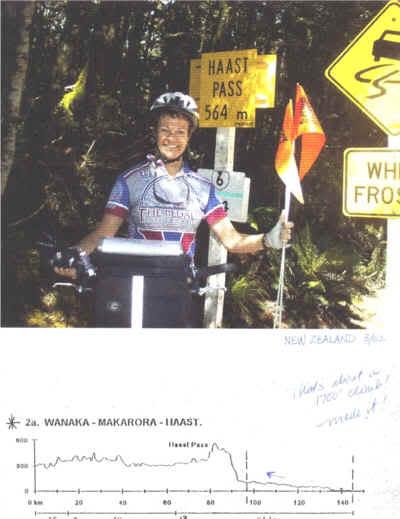 Eric Stone of Vallejo, California, was our whole Downhill Team in 2002! 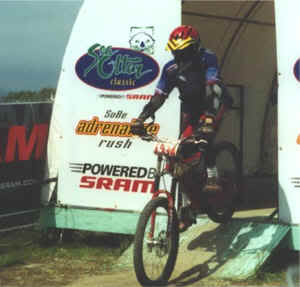 Look at Sherie Reineman out on the "Three Bears Loop". What about that cool horn?? For a free Ped T tell us what road she is on (Sherie, you can't play and don't give anybody any more hints!). 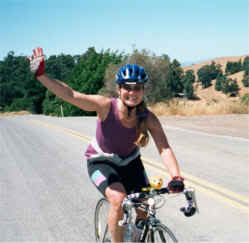 Check out some of our customers who have completed the California AIDS Ride: 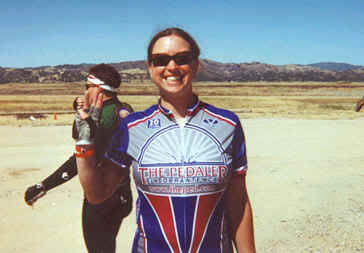 Check out Evelyn on the 2000 ride before the King City to Pasa Robles ride, 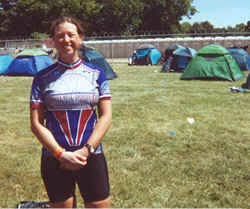 Jim Oerther on the 2000 ride. Congratulations to Kevin Montgomery of El Cerrito, Ca. For giving us Jim's last name Kevin received a free Ped T! Kevin must have had some inside information....

If you decide to do the ride, here is some information taken directly from the official site: You’ll ride south down the Peninsula through wooded valleys and quiet coastal communities into Santa Cruz.  Then onto Steinbeck country as you bike through the pastoral Salinas Valley and its vast sun-swept fields and miles of rolling hills into King City and on down the coast through sleepy beachside towns as the locals come out with signs and high-fives to cheer you on.  Pitch your tent in an abandoned airfield at Oceano Airport before heading south into Southern California for the Ride’s grand finale. Have lunch in Santa Barbara, camp near the beach in Ventura, and then follow the breathtaking Pacific Coast Highway down into Los Angeles, where thousands of cheering supporters await you at the emotional Closing Ceremonies.

The ride changes year to year. In 2000 the ride  from SF to LA lasted 7 days and traveled a total of 575 miles! It started by traveling down Highway 1 (PCH for you LA folks) and headed inland somewhere around Monterey. Expect cold fog and windy conditions to start the ride (tail wind!!!). When you head inland you can expect blistering heat, so bring clothes for the varied conditions you may encounter. 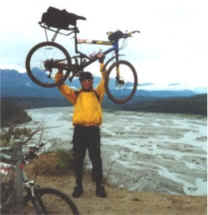 Here is Erin Marlow with his Cannondale Jekyll in ALASKA on the Alaskan AIDS Ride in August of 2001. He completed the ride AND his bike made it back in one piece! As you can see in the picture, riders experienced inclement weather. Expect all sorts of road conditions. I can tell you form the picture that Erin is standing next to a river that is fed from a glacier, not many fish! If you ride in Alaska, be prepared for anything.
Did you know????

Here's a few tidbits about bears:
Bear spray is used to repel charging or stalking bears. Don't use it like mosquito repellent!  Grizzly Bears will fake charge, stand your ground, DON'T RUN. Make lots of noise while you are outside and in the State of Alaska. Don't get between momma bear and her kids!  Alaskan Black Bears have been known to stalk and eat people. Alaskan black bears are not small. They will circle around you and check you out. Don't get traped. Fight back if you feel like you are about to become dinner. Alaskans tell us that a .50 caliber pistol is the smallest weapon you should consider to stop an Alaskan bear! According to official State of Alaska literature, if a Polar Bear is running towards you, you have been "identified as a food source"!

Very few bear attacks ever happen anywhere in the world. Alaska has only a handful of bad encounters each year, most of the bad encounters are bad for the bear! Almost every one of them could have been avoided entirely by following the rules. If you go to Alaska just make sure to play by the bears' rules and you shouldn't have any trouble.  What are the rules? That's your job to find out BEFORE YOU GO!